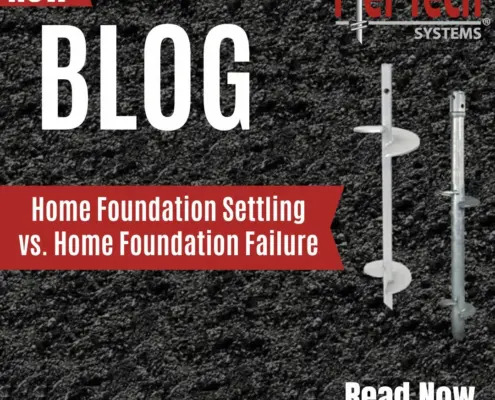 Know the difference between home foundation settling vs. home foundation failure is very important for homeowners. Settling of a home is something that is nearly unavoidable for all homes, no matter when, where, or how they were built. There are vast differences between foundation issues, and home settling. Many homes will settle a few inches over time, but rapid settlement in aWhen and How to Use Helicals on Your Foundation Project new home does not standardly occur. A home that has settled more quickly than normal shows that there may be foundation issues that need to be addressed sooner rather than later.

There are several Signs of Foundation Problems to be aware of when looking at cracks within a home. When there are issues in a home it is important to have knowledge of the weather patterns. Weather patterns have a direct effect it on the soil. Most companies building homes are aware of the climate and soil they are building on. During construction they should try to ensure that there will not be foundation problems, and the home is built so that it will settle over time.

This does not mean that all builders have considered this or taken the correct precautions, often homeowners will notice foundation issues where their home was built without reviewing the soil it was built upon or the climate in which it was built.

Other times there may be unpredictable years of weather causing abnormal amounts of settlement creating greater foundation issues.

Often, a builder may consider this and be aware of the issues that would potentially arise due to abnormal weather and build so settling still occurs over an extended period, however, not all take this into account leading to faster settling, foundation issues, and potential foundation failure of the home.

The best option is always to have a professional look at potential foundation issues, inspect the foundation and home, and see if they recommend Foundation Repair.